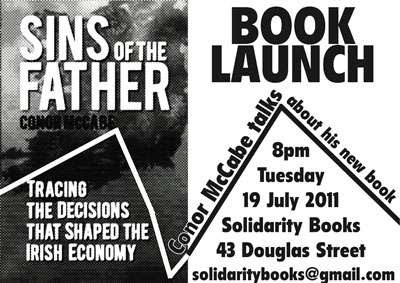 My day began on a sour note involving a carpet and cat vomit but ended rather well with the Cork launch of Conor McCabe's Sins of the Father. The attendance was good, bigger than any of the previous historical discussions hosted by the wonderful Solidarity Books and the dicussion that followed the main talk was varied and interesting. With Conor's permission I recorded the majority of the meeting. Any problems with sound and so on I take full responsibility for (still getting used to digital recording). As usual, I must plug Solidarity Books and heartily recommend them for anyone living in / passing through Cork.

Having found every wma hosting site I've came across to be run by a bunch of cunts with little or no interest in whether their sites actually work, I have emailed the files to Donagh who will post them on Dublin Opinion.
Posted by Budapestkick at 00:50 No comments:

Anyone who happens to be in Cork oughtta call down 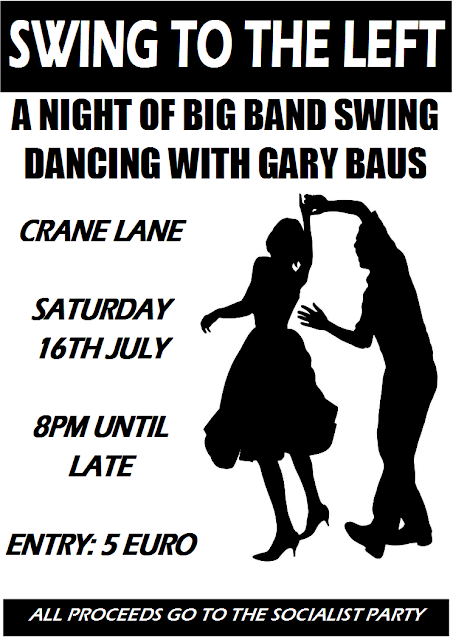 Here is Gary playing sax with the God-Fearing Folk:

and here's a recent interview:

Posted by Budapestkick at 20:18 No comments:

While researching his highly interesting phd thesis (later self-published book) Official Irish Republicanism, 1962-1972, political scientist Seán Swan was forced to interview bloated moron and Sindo crank-in-chief Eoghan Harris. While there are flaws in the book, Swan should be congratulated for his committment to history as the U.N now actually consider time spent in Eoghan Harris's company as a violation of basic human rights. Having received a request to make available Swan's description and analysis of Harris (itself valuable as a medical record of male menopause) I present to you Seán Swan's greatest undertaking. Please note that the following passages occur after a lengthy quotation from Harris. I attempted typing Harris's full quotation but my laptop actually got physically sick from inflicting such shite on its hard drive and vomited the quotes back out. They are now on my kitchen floor, being mopped up with old copies of the Sunday Independent while my cat, despite not posessing language, gazes upon them with a primordial feline contempt:

Harris's position here is special pleading at best; pure can at worse. Opposition to sectarian violence must be aimed at both sides. The Provisionals were the product of northern nationalists and were no more Harris's 'own side' than were the Unionists. Northern Nationalists differ profoundly from the population in the Irish Republic. But this is exactly what is to be expected, given the profoundly different social realities under which both groups lived since 1920 - indeed, since the Seventeenth century. . .

Harris' 'anti-sectarianism' was shown in a different light in the context of his fanatical support for the invasion of Iraq. The invasion and the reduction of the state if Iraq to a state of nature through the deliberate destruction of the Iraqi state, opened the gates of hell for that unfortunate country. It unleashed the forces of sectarianism and terrorism on a country where they were previously absent.

The mythical 'WMDs' never materialised. The claim that the invasion will bring about democracy in Iraq is equally spurious - the creation of a Black Water run puppet state, unofficial partition or a theocracy are far more likely. Whatever the final outcome, it will have no meaning for the 2.5% of the Iraqi population, who died as a result of this 'liberation' up to July 2006. This is what Harris's cheerleading for war helped facilitate and it is in this context that his position on Northern Ireland must be judged. His 2007 advice to the UUP to join the DUP is also difficult to understand in terms of any 'anti-sectarian' (as opposed to anti-nationalist) strategy. Like many of Harris's ideas it is fatally flawed and could help destroy any remaining common feeling between the British public and Ulster Unionists by luring the unionists into making a party viewed in Britain sd religious fundamentalist, bigoted and unmistakeably 'other', their exclusive political face. This is doubtlessly not Eoghan Harris' intention but then so many of his previous good intentions have later paved the way to hell. [Nor is he fully trusted by unionists, being accused of 'confused thinking on the nature of terrorism' by the liberal unionist Cadogan group.]

Seán Swan: Neither of us are, to my knowledge, homosexuals. Nevertheless, I wish to marry you and bear your children.
Posted by Budapestkick at 17:53 No comments:

Budapestkick
Marxist activist and historian. This blog exists for the purpose of hosting material I find interesting and for my occasional musings on history, society, politics etc.